What is PP Live dollars?

Recently I’ve always come across with some PP Live Dollars satellites in the partypoker lobby. What is it?

Well, PPL Dollars is a currency that was invented by PP for their players’ convenience. You can win the PPL Dollars in special PartyPoker satellite tournaments that are held at any time, and then spend them on live series under aegis of PartyPoker.

To spend them on live series? How?

Easily. You are to arrive at any offline series held under aegis of PartyPoker. Then you need to express your wish to register to a tournament using your PPL Dollars at a reception. That’s it.

You don’t spend your personal money, whereas the tournament buy-in will be charged to your PPL Dollars account.

You are no longer tied to the game for a ticket for a particular series. Even if your trip plans are changed, you will not lose your money (in contrast to a ticket). It’s possible to spend your PPL Dollars on any other tournament. You can also use the PPL Dollars on side events. And again, you are not tied to a certain tournament and are free to build your bankroll and choose your personal schedule.

Moreover, you can pay for your transfer and accommodation at any PartyPoker live series with the usage of the PPL Dollars as well.

To pay for transfer and accommodation with PPL Dollars?! What?

Exactly. PPL Dollars currency was created to maximize partypoker players’ convenience on PartyPoker live series. Therefore, the money you spend on a plane ticket and accommodation during the series will be “refunded”. Why is the word “refunded” in quotes? Because this is not a direct refund but a write-off from the PPL Dollars wallet balance and a transfer to a regular PartyPoker cash account.

Thorough explanation: Let’s say you decided to play in the “Sochi Casino” during the EAPT PartyPoker series. Your plane ticket costs $150, and ten days of accommodation in the “Gorki Gorod” apartments cost $350. Your total expenses for visiting the series are $500.

Directly during the series you need to come to a special PartyPoker Live reception in the casino and present your receipts for the flight and/or accommodation. After that, the corresponding amount of PPL Dollars will be written-off and transferred to your PartyPoker account where you can dispose it as you wish.

You mentioned some PPL Dollars wallet, but I don’t have this. Where can I get one?

PPL Dollars currency is stored on the ‘My PartyPoker Live’ portal. Your wallet is also there rather than in your partypoker client.

Therefore, in order to use the PPL Dollars you need to make the three following steps:

Binding My Partypoker Live and partypoker accounts is just a few clicks away, but if you have any problems, click the ‘chat now’ button in the lower right corner and the expert will help you with any questions.

Your PPL Dollars will be stored exactly in this wallet. Having accessed to this wallet, you are able to register yourself for the necessary tournament through partypoker Live. In case of any doubts or not enough balance that is needed to be funded you can contact a PartyPoker Live specialist. You can also ask him or her questions about compensations mentioned earlier.

Okay, I got it. But how to win this PPL Dollars currency?

You can win them in special satellites at partypoker. Although the tournaments are held literally all around the clock, the action reach its peak in evening time.

The can be found in the client’s lobby: Poker/Live events/PPL dollars.

The PPL Dollars satellites’ buy-ins start from one cent!

The currency is played in packages of 50, 200, 500, 1000 and 5000 PPL Dollars. In most of PPL Dollars satellites overlays periodically take their place. The buy-ins to the satellites are as follows:

Surely, starting from the finals is not obligatory. You can start you way with smaller buy-ins’ satellites, and to get to decisive battles through them.

The grid of satellites changes periodically, the information is valid by the time of this publication (09/09/2018).

The total guarantee of all satellites to the PPL Dollars currency is $1.200.000 each week.

Note that the PPL Dollars balance is calculated within 24 hours after the satellite played. While these funds will not be accrued and not displayed in your wallet, you will not be able to use them.

Is it possible to pay for online tournaments’ buy-ins with this currency?

By default – no. However, there is an opportunity to participate in the buy-ins’ (from $530) satellites to the Millions Online tournament with the PPL Dollars.

Until April 2019, all players who participate in the satellites to the PPL Dollars currency also take part in a special ‘table of leaders’. 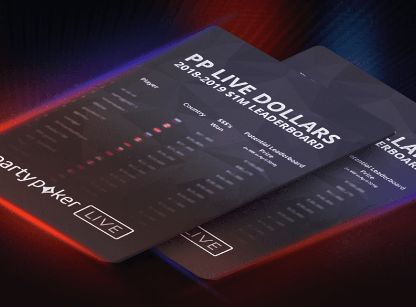 That’s awesome! Any other promotions?

Almost all live series under aegis of PartyPoker Live have promotions related to PPL Dollars. For instance, something like “Last Longer”, where the first 100 players who pays for their buy-ins with PPL Dollars participate.

A player, who is eliminated later than the other participants are, receives $100,000. The last time the “Last Longer” was played at Millions Russia in Sochi where a Russian player Vyacheslav Nikulin won the prize.

If you are one of the first 100 people to buy into the MILLIONS Main Event with PP LIVE Dollars, you will receive $1,000 in your partypoker account towards your expenses: travel or hotels.

The “Payment of rake” promo.

In some series under aegis of partypoker, those players who pays for a tournament’s buy-in with PPL Dollars do not pay the rake. Absolutely. For instance, at the recent EAPT Altai, players who paid a buy-in to the Main Event spending their PPL Dollars saved 2,500 rubles. Moreover, the Millions Russia in Sochi participants put 18,000 rubles back in their pockets.